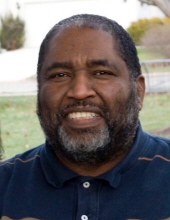 In Loving Memory of Dwight Merritt

Dwight Merritt, 64, of Indianapolis, IN, passed away in his sleep on September 11, after a long battle with renal disease.
Dwight was born on April 4th, 1956 to Delores Likely in Cincinnati, Ohio. He spent his younger years playing basketball and running cross country. After graduating from Shortridge High School, in Indianapolis, he went on to study at Indiana University in Bloomington, Indiana, where he joined the Kappa Alpha Psi fraternity. Dwight acquired a Master's in Business Administration at Spring Arbor University in Michigan.
Dwight has been a minister for a number of years starting with Family Christian Fellowship, Antioch Church of Toledo, Kingdom Quest Ministries, and lastly One Hope Church.
Dwight is survived by his wife, Norma Merritt, his daughter Sonia Merritt and son-in-law Joe Zhou, his son Nathaniel Merritt, daughter Olivia Merritt, mother Delores Likely, sister Melanie Lightfoot and her children and grandchildren.
Dwight was known as a mover and a shaker. His charismatic personality enabled him to light up a room. He was always willing to share the gospel to whomever he thought might need it. The family is comforted in knowing that Dwight is now resting in peace.
To order memorial trees or send flowers to the family in memory of Dwight Merritt, please visit our flower store.