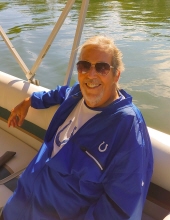 After high school, he attended Indiana University and earned his degree in Business in 1976. He was a proud member of Fiji [Phi Gamma Delta] fraternity. The friendships he made during his Fiji days remained lifelong. He graduated in 1976, the historic year IU Basketball was crowned national champions with an undefeated record 33-0.

Duke began his 44-year insurance career as an agent with Lincoln National in 1977. Over his 40-plus year career, he established his own insurance brokerage business and later expanded that business with his wife, Cindy.

While growing his business, Duke pursued physical excellence by competing in triathlons in Boston, Chicago, and Detroit. He went on to compete in numerous events including endurathons, cycling events such as the Hilly Hundred, and half-marathons like the 500 Festival Mini-Marathon.

Being a father was something he treasured. He was proud of all 4 of his children and encouraged them to live their dreams. Duke coached his children in baseball, basketball, and softball and cheered his sons on in football and wrestling as well. He embraced coaching them in baseball and softball so much that he became the president of Fall Creek Little League, where a field was later named in his and the family’s honor. Duke’s sense of humor is part of what defines his personality, and his children still watch and recite quotes from 80’s movies that made Duke and the entire family laugh.

The impact Duke made in the lives of youth he coached in sports is everlasting. In addition to being the president of Fall Creek Little League, now known as Fall Creek Softball & Baseball, he was also the commissioner of youth basketball at the Jordan YMCA in the 80's.

The role of grandpa was one that made Duke smile immensely. He enjoyed watching his grandchildren play sports or dance in recitals.

Duke was very much a sports guy! He had season tickets to the Indianapolis Colts games beginning in 1984 and rarely missed a game! He enjoyed attending Indiana Pacers games in addition to multiple trips to Bush Stadium and Victory Field throughout the years with family or friends. Duke was a lifelong fan of the Indianapolis 500, and attended over 40 consecutive races, only interrupted by the pandemic. He was very much looking forward to being in the stands for the 2021 running!

Duke also enjoyed being around the water. North Myrtle Beach, SC., boating on Monroe Lake, Lake Clearwater, Lake Tippecanoe in his younger years, the Gulf and cruising the White River were his favorites. For the last 8 years, he and Cindy were members of the White River Yacht Club where they were privileged to make many wonderful friends.

A Celebration of Life is being planned for Thursday, May 27th at the White River Yacht Club, 7400 East 74th St, Indianapolis, IN from 6:00pm to 9:00pm. Time will be taken for family and friends with remembrances of Duke at approximately 7pm.

We wish to thank all our friends and family for their thoughts and prayers during this difficult time.

In lieu of flowers, please donate to Down Syndrome of Indiana, 708 E Michigan St, Indianapolis, IN 46202, https://dsindiana.org/donate/ or the White River Yacht Club foundation, 860 E 86th St., Ste. 5, Indianapolis, IN 46240.
To order memorial trees or send flowers to the family in memory of Duke Brown, please visit our flower store.