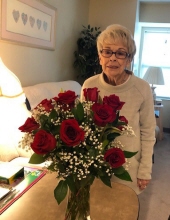 Doris A. (Frederick) Davis, 87, died April 9, 2020 at Southpointe Healthcare, Indianapolis, IN. Her funeral service will be private at Indiana Funeral Care in Castleton, IN.

Mrs. Davis was born on March 25, 1933 in Breathitt County Kentucky, where she was taken to the Bethany Orphanage, Wolfe Ct, Kentucky. She was later adopted by Forrest and Gladys Frederick of Muncie, Indiana during the difficult years of The Great Depression.

Mrs. Davis graduated from Muncie Central High School, worked as a sales clerk for Ball Department Store, Muncie, Indiana. Later she became a homemaker and a mother, raising three children and two step-children. Among her hobbies were singing in the church, singing with the Sweet Adeline and growing beautiful flowers. She was a kind and loving person, a great listener and engagingly witty.

In lieu of flowers, contributions in her memory may be made to: Gift of Peace, Franciscan Health Foundation, Central Indiana, 5255 E. Stop 11 Rd, Ste 245, Indianapolis, IN 46237 or Charity of choice.
To order memorial trees or send flowers to the family in memory of Doris Ann Davis, please visit our flower store.