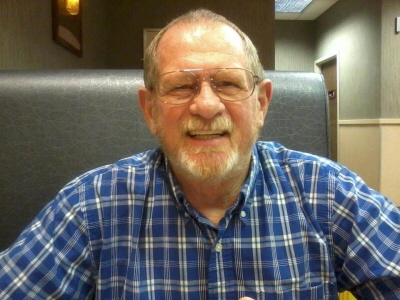 Donald Graduated from Tech HS in 1965. After graduation, he enlisted in the United States Army on August 28th, 1966. He was sent to Vietnam, 1st Calvary Division, where he received a Purple Heart for injuries he suffered in an enemy mortar attack at An Khe. PFC Donald J. Copp was honorably discharged August 29th, 1969. After the Army he settled in Indianapolis and worked at Methodist Hospital as a courier, where he later retired.

He loved spending time with his children, grandchildren and great grandchildren and eating at McDonalds. He never met a stranger, was known best for his willingness to help others and his quirky sense of humor.

Donald was proceeded in death by his father; Walter, his mother; Byrdiemae, and sister; Jane Bremer. He is survived by his three children; David Copp of Greenwood, Greg Copp of Daleville, and Melissa Harris of Greenwood. He had seven grandchildren; Ashley Henschen(John), Chrissy Harris, Sierra Harris, David Copp, Cynthia Copp, Chance Copp, and Alaina Copp, seven great grandchildren and many nephews and cousins.

He will be dearly missed by many.

Celebration of Life Services will be at Indiana Funeral Care, 2433 East Main St. Greenwood IN 46143, on Tuesday November 2nd. Visitation will be from 11am to 2pm and the service following at 2pm, with a Military Honor Guard Ceremony. There will be a private ceremony at a later date, where Donald will be laid to rest with his mother in North Salem, IN.
To order memorial trees or send flowers to the family in memory of Donald James Copp, please visit our flower store.