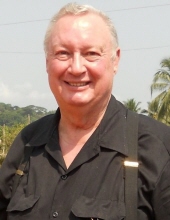 Carmel - David Williams Russell, 75, Carmel, died November 3, 2020, of natural causes. David was born in Lockport, New York, on April 5, 1945, to the late Jean (Graves) Williams Russell and David Lawson Russell, who at the moment of David’s birth was working as a Coast Guard officer, landing Marines from his LST transport ship onto the beaches of Okinawa during the last great battle of World War II. He came from great beginnings.

A naturally curious person and indefatigable learner, David attended Dartmouth College, where he was a Daniel Webster National Scholar and in ROTC, earning his A.B. in 1967 and his M.B.A. from Dartmouth’s Tuck School in 1969. In 1967, after a summer teaching English at Talladega College, a leading black college in Alabama, David began teaching mathematics at Lyndon Institute in Vermont. In 1969, as one of the first M.B.A. Administrative Fellows selected by the Woodrow Wilson National Fellowship Foundation, he was appointed Chief Financial Officer of Tougaloo College, a prominent black college in Mississippi, where his work landed him on the front page of The Wall Street Journal. In 1973, David entered Northwestern University School of Law, earning his J.D. cum laude in 1976. Being able to help people in business and in life fed his soul, and he would often extol the virtue of helping others.

For 44 years, David practiced domestic and international business law. So instrumental was he in the '80s and '90s at forging business relationships between Indiana and Asia that the mayor of Indianapolis declared January 15, 2002 to be David Williams Russell Day in recognition of his contribution. That same year, Indiana’s Governor named him a Sagamore of the Wabash, the highest leadership recognition awarded by an Indiana Governor. David believed in serving his community in more ways than one and devoted countless hours to pro bono legal work locally and internationally.

Among his many other various achievements, he was an Eagle Scout, author of over 80 publications on legal and business subjects, wrote several chapbooks of poetry, was named an Indianapolis Super Lawyer by both Indianapolis Monthly and Law and Politics Magazine, and in 2017 received the Lifetime Achievement Award from Who’s Who in America.

A renaissance man, David Williams Russell was not only a brilliant corporate lawyer experienced in cross-border transactions, but he was also a talented poet, and a generous and devoted grand-papa, papa, husband, uncle, brother, and son. He was an independent thinker, a true gentleman (who might remind you that your martini really should be stirred and not shaken), a conscious contrarian, a voracious reader of multiple novels and newspapers per day, an Ernest Hemingway scholar, and a finisher of New York Times crosswords. An armchair historian, David traced the Russell family tree all the way back to the Massachusetts Bay Colony in 1626 after which the family was expelled for heresy and banished to Providence. Like his ancestors, David was unorthodox. David had a playful, acerbic wit and ever had a clever quip ready and some thoughts to share whether about the state of the world or the latest knowledge that had struck his fancy, and he held others to a high intellectual bar most could not hope to pass. Some of us struggle to find the right words and know the right thing to say in a difficult situation, but for David that was never a problem. He was the most delightful and satisfying person to talk to if you ever had a problem, because not only would he have an answer for you and more background knowledge than you could ever have imagined, he would be completely devoted to your cause and support you unquestioningly and unyieldingly. A person could know with certainty that David would be a champion for their cause. Your enemies would become his, and he took on the world for his clients, family and friends--a warrior with words for swords. David spoke clearly with bright eyes, verve and uninterrupted enthusiasm. Talking about life was his way of processing it, and he was the type of person who commanded an audience. Like some can cut an apple in one long peel, so could David tell a story. Larger than life in so many ways, he had a big personality, big opinions, and an even bigger heart. He loved old British motorcycles, sleek little sports cars like his Jaguar XK-E, sharp knives for his extensive collection, counterculture music like The Fugs, Cape Cod, and the family pets (his oft-repeated mantra being “What about the cat?”). So beloved was one family cat, a wild tabby named Geronimo, that he would take the cat for daily bike rides to enjoy the sights and fresh air with him. Another, Mao Mao, he took for family drives on Lake Shore Drive in Chicago to enjoy the city lights. A descendant of the Williams Brothers Department Store in Lockport, New York, David had an eye for style and dressed with panache, always in a freshly pressed Brooks Brothers shirt and a custom, season-appropriate wool suit with snappy silk lining at the office, ever dapper in a camp shirt and khakis while relaxing on the weekend, or chic and all in black for a night out on the town.

David worked tirelessly for most of his life, and sacrificed to provide for his family. He knew he had big feelings and could be like a roller coaster, but insisted that the world meet him on his terms. David insisted that people love you for who you really are; he was fiercely himself and never asked anyone to be different than who they were. He loved his family with all his might and without hesitation or bounds; he was loyal to a fault and would always be there for a family member or a friend. He was joyful about the fall holidays, and in his later years had started to learn to do things to make himself happy instead of working all the time. Despite his hectic schedule and myriad engagements, he never missed a swim meet or a piano recital and was always thinking about what he could do to make other people’s lives better. Family, he said, was his greatest achievement. He appreciated the little things in life: watching geese at the lake, taking in the Christmas lights, breathing in the fresh air on a hike or ski, singing silly songs, and enjoying kids’ costumes as he handed out Halloween candy, a personally carved pumpkin or three alight by his side of course. He was the type to celebrate birthdays and wins, whether his or another’s, often over a fine meal with candles. David would order another couple dozen oysters or a few more dishes at dinner if that's what he felt like, and there was nothing anyone could do to stop him. David was classy, extravagant, and excellent at everything he put his mind to doing, and despite having a tongue that could cut like a knife, he had the most wonderful, big heart. He will be remembered often and so missed.

To share a memory of David or send a condolence to his family please visit www.indianafuneralcare.com. Due to Covid, a memorial and wake will be held at a later date. In lieu of flowers, the family requests donations to the African University Foundation in his honor by going to www.aufoundation.org
To order memorial trees or send flowers to the family in memory of David Williams Russell, please visit our flower store.