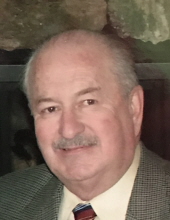 A life filled with what his family calls, "Papa-isms," David Lawrence Michener Sr. leaves his family with an abundance of memories and stories with his passing. He, himself, was a vivid story teller, and his story began October 18, 1940, born to Grant and Ruth Michener in Eastlake, Ohio (both deceased) with siblings Carol “Sis” Lago (deceased) and Grant Michener (deceased). Little did they know that Dave’s story would span across 8 decades, touching the lives and hearts of many along the way with his wit, charm, and passion for people; the first being the heart of Marie Short who eventually became Marie Michener on November 5, 1960.

Dave met Marie in church and could still recount to his family the moment he knew that she was the ONE that he wanted to spend the rest of his life with even though he was only 15 and she was 13 when they met. "It was her eyes that caught mine. When you know, you know... and I knew." Dave spent the rest of his life loving Marie and telling her stories. He never stopped chasing her.

Dave added chapters to his story with the birth of his three children, David, Robin, and Karen. All three witnessed at an early age what he believed to be the secret to success in life, which was to, "Obey God. Live for others." He went through life in everything he did with that mantra, whether it was serving as a sonar man on the Charles R. Ware Destroyer for the US Navy, being a teller at Society National Bank, becoming a Department Manager at a JC Penny, or taking on a sales role at Erbacher's Sporting Goods before finally finding his niche as an Agent at State Farm Insurance for 35 years. Dave found a job where he could live his passion for people and "actually get paid for it." In retirement, Dave was an employee at Tuttle’s Nursery which allowed him to work with his hands and be outside.

Dave’s story has an underlying theme of loving God and loving others. He served as a youth advisor for 17 years, a deacon at his church many years and most recently has participated and helped lead in men’s ministries and small groups at Brookville Road Community Church. He truly enjoyed serving and took advantage of being on several overseas mission teams, taking him around the world. Dave and Marie also loved to support a child in the Dominican Republic through Kids Alive.

By example, Dave showed his children what a Godly marriage looked like, taking pride in one's work, but also, how to laugh. Dave is survived by his children, David L. Michener Jr. (Donna), Robin Michener Ozinga (Dave), Karen Michener Tuttle (John) all of whom continued Dave’s legacy by making him "Papa." Dave was "Papa" to David "Davie" L Michener III, Dustin "Dusty" Michener (Kristin), Dakota "Cody" Michener (Sydney), David Scott Ozinga (Katlin), Taryn O'Dea (Mike), Jon King (Katie), John Tuttle II (Kaylin), and Claire Tuttle. All of whom inherited a little bit of Papa’s story and all of whom can laugh a little in memory even in the midst of mourning. The ending of Papa's story is also the beginning of many others as he was also blessed with 6 great grandchildren in Kinzley, Reagan, Winston, Carver, Frances, and Jolene (with a 7th on the way).

Papa was an outdoorsman and loved to hunt and fish. As he used to say, “Fishing is always great, but catching is sporadic,” and he could be found fishing anytime, anywhere. Papa also instilled these passions into his grandchildren and even his great grandchildren. In recent years, Papa could be found on his bright green golf cart out exploring, fishing, and visiting with old friends and employees of Tuttle’s Nursery.

He didn't have to leave for everyone to surely miss him. But now that he's gone, his family takes comfort in the fact that there's a little bit of Papa’s story in all of ours. Known for his wit, kindness, and generosity, Papa will be greatly missed, but his family holds onto his memory which is full of Papa-isms, laughter, love, and most of all...stories.

Dave “Papa” Michener’s life work, Then There Was the Time, is currently awaiting publication.

Services for Dave are being held on Thursday, August 27th at Brookville Road Community Church, New Palestine, Indiana with a viewing from 11-2pm and funeral service at 2pm. A private family graveside service will follow. According to CDC and state guidelines, we request attendees wear a mask and social distance when not with their group.
To order memorial trees or send flowers to the family in memory of David Lawrence Michener Sr., please visit our flower store.