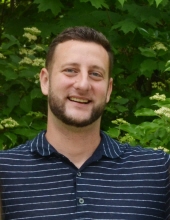 Daniel Christopher Witter passed away October 14th, 2020 at the age of 33.

He was born in Indianapolis, Indiana on April 15th, 1987 to parents Christopher and Christine, and brought home to proud big sister, Ashley. Daniel, who was affectionately called Bubby, was known for his big heart, huge hugs, and playful personality. He was adored by his family. He could always be counted on for amusement at family gatherings by sharing his latest adventures. He was extremely proud to be an uncle. He made friends with everyone, and could talk to anyone about anything. He had a love for his mom’s home cooking, all things spicy and would often finish others food after he ate his own. As a child, he became obsessed with the color green. He’d only eat green beans, only wear green clothes, would only watch Ninja Turtles and became a loyal fan to the New York Jets.

It was as a small boy when he developed his love of sports; watching ESPN on repeat every day, and playing youth baseball, basketball and a year of football until he broke his femur bone. His first love was basketball. However, he developed a life long passion for golf. He had a mean three point shot and a skilled golf swing. He was competitive, wanting to be the best and win in everything he played. As most of you know, Daniel would need to replace a golf club now and then. He enjoyed traveling with friends for golf trips and wouldn’t pass at the opportunity to try a new course. Through the many rounds of golf and numerous courses he played, it was at Pleasant Run golf course with his dad that he felt most at home. Golfing was his favorite way to spend his days closely followed by a great nap.

Daniel attended Beech Grove schools up until his sophomore year when he and his family moved to Fountaintown. He finished his last two years and graduated from Triton Central High School. It is there that he was given the nickname, “Grover.” Daniel was on the varsity basketball and golf team for the Triton Tigers. He played forward where he helped take the team to the regional final. Eager for a change of scenery after high school graduation, Daniel had a short stay in California where he found he loved living on the west coast. He moved to Bullhead, AZ to earn a living as a server, gamble and also hustle a good game of golf. After living out west for a few years, Daniel returned home to Indiana with his beloved family and friends. Daniel worked in the hospitality industry as a server and part-time in construction until the end of his life. He spent the past five years of his life living with his great love, Brittany York.

Daniel is survived by his loving parents, Christopher & Christine; sister and brother-in-law, Ashley and Sean Duffey; grandma, Judy Strong; nephews and niece, Liam, Oliver and Callie Duffey; and his aunts, uncles and cousins

Daniel enjoyed living; he sought out success and lived life to the fullest. He will be thought of often, painfully missed, and forever loved.