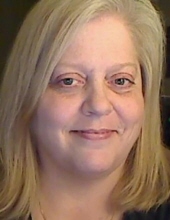 “God’s gift to my mother and Daddy’s little girl.”

Cynthia Marie Smoker, born February 4, 1960 in Sturgis, Michigan to her parents Thelma (Mikolatcher) and Leonard Smoker, passed away at University of Indiana Methodist Hospital on September 10, 2020 after a seven-year battle with ovarian cancer. She attended school in Sturgis participating in tennis in high school as well as playing violin in the high school orchestra. She continued her violin performance while attending Western Michigan University in Kalamazoo, Michigan where she received her B.S degree. Following graduation, she worked in retail in Kalamazoo and Grand Rapids, Michigan before moving to Indianapolis which she has called home for thirty years. It was her love of flowers that led her to her last place of employment, McNamara Florists of Indianapolis. Cynthia was an avid sports lover including watching her Indiana college teams as well as all Colts and Pacers games. She also had a big heart for animals, especially her previously beloved Yorkie, Rafferty, and presently her tuxedo cat named Sammy.

The family would like to thank Dr. Sara Grethlein and the many doctors, nurses, and medical personnel at Simon Cancer Center, and University of Indiana and Methodist Hospitals who gave wonderful and loving care to Cynthia during her long journey. Several memorial gatherings will be held for Cynthia, one at McNamara Florists and the other for family, date and time to be determined. If you choose, memorial donations may be made to your local animal shelter or IU Health Simon Cancer Center, 1030 W. Michigan St., Indianapolis IN 46202.
To order memorial trees or send flowers to the family in memory of Cynthia Marie Smoker, please visit our flower store.