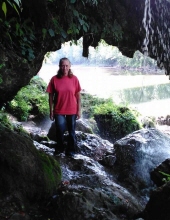 Corrina has passed away on Thursday, Thirtieth of April. Married to Clifford A Poynter. Corrina was born to Billy Joe Rader and Janet Arlene Rader (Huffman), Sister To Barry Allen Rader.

Corrina was born in Noblesville Indiana, and grew up in Lebanon Indiana. Was a graduate of Lebanon High School. She owned and worked at Lebanon Trim and Groom for many years working with animals which was her passion. She had a love for fishing, camping, kayaking and anything that was nature oriented. She had many talents such as taxidermy, shoe making, crocheting. Anything she wanted to do she accomplished. Her final job in Lebanon was at Weston Foods bakery. She lived life to the fullest.

Corrina has touched many hearts and made many memories with many, and will be missed by all.

Corrina is preceded in death by her Mother Janet A Rader(Huffman), brother Barry Rader, and stepson Nickolus L Poynter.

The family will not be holding services.
To order memorial trees or send flowers to the family in memory of Corrina Poynter, please visit our flower store.