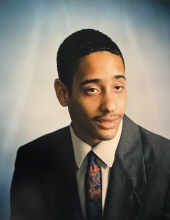 Corey Davis Pinner, age 42 of Indianapolis, passed away on Tuesday, August 26, 2020. He was born in Indianapolis on September 22, 1977 to David and Alexis Pinner.

He is survived by his father David Pinner (Judy), his mother Alexis Pinner and brother Marc A. Pinner. Corey was preceded in death by his brother Evan Pinner and Grandparents.

Corey Pinner began his life much earlier than expected. He fought hard against the complications of pre-mature birth and won that battle. Later as a young man he faced an even more formidable foe, that of being able to balance the coherencies of life. He faced this challenge for years, eventually succumbing to its ravaging toll on August 26th 2020.

Corey was a well liked person. And when possible he always wanted to helped others that were in need. He was a very caring son. He loved working 3-D combination puzzles like the Rubik's Cube. One of his hobbies was collecting unique items. And he could tell you the history associated with each item.

He will be remembered fondly not only by his family and friends but even more importantly, we pray, by the almighty God that he loved, Jehovah! Psalms 83:18.

The assurance from God’s inspired word the Bible will comfort us until as promised “all those in the memorial tombs will hear his voice” and come out .. John 5:28,29.

Corey will then experience the “real life” with the opportunity to live on the paradise earth forever and ever Psalm 37:11.
To order memorial trees or send flowers to the family in memory of Corey Davis Pinner, please visit our flower store.