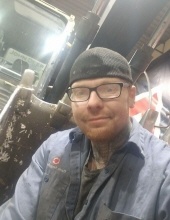 Cody Ryan Pence aged 31, born April 15th, 1989, took his own life on August 9th, 2020. After battling with mental illness his whole life, he finally allowed the disease to envelope him. The inner struggle at times showed itself, he tried to be strong and control this awful disease but strength is always not enough.
He will be missed by all who knew him because of his wit, his sensitivity, his love for experiences in life, and his intelligence.
He leaves behind Victoria Locander, a woman he had planned to marry, his mother, Diane Pence, his father, Dana Pence. Preceding him in death, was his Grandfather, Howard Miller, Grandmother Nellie Miller, Grandfather Robert Pence, Grandmother Phillis Monroe. No one knows the inner struggles of anyone else and can not control their actions, with deep regret we all, who knew Cody Pence wish him peace which he could not find in this life.
To order memorial trees or send flowers to the family in memory of Cody Ryan Pence, please visit our flower store.