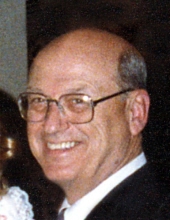 Charles, 94, known to old friends as Bill, died of institutionally-acquired Covid-19 on January 8, 2021, 17 days short of his 95th birthday. He had tested negative for Covid before entering a nursing facility for physical therapy on December 14, but after 2 weeks in residence he tested positive.

He was born on January 25, 1926 and grew up in Bloomington, Illinois. His father, Charles Sr, was an executive of the GM & O Railroad while his mother Helen (Ott) raised their 2 intelligent, refined girls and 4 obstreperous boys, who liked to brag that the only rule they ever observed at the dinner table was “Keep one foot on the floor at all times.”

Charles played football and baseball at Bloomington High School while dating his future wife, Mary Elizabeth Jones. His graduation ceremony was held on January 15, 1944 and on January 24, the day before his 18th birthday, he enlisted — as did virtually every American of his generation.

He had Army basic training in Texas and artillery school in South Carolina before his unit was shipped to the European Theater as part of the 444th Automatic Weapons Battalion. They saw action at the end of the Battle of the Bulge before participating in the Battles for the Rhine and the Ruhr Pocket. His unit was then assigned to the 97th Infantry, part of Patton’s 3rd Army, which had the mission of driving the German army out of Czechoslovakia. There, on May 8, 1945, while on duty at his observation post on a hill overlooking the town of Pilsen, he learned that Germany had surrendered, Hitler was dead, and the war in Europe had ended. He remained overseas for another year, but by June of 1946 he was a civilian again.

On November 27, 1947, while attending Bradley University, Charles married Liz Jones, who was by then a Northwestern graduate. They lived in Peoria, Illinois until he graduated with a Mechanical Engineering degree in 1950 and started his career at Ferro Industries in Cleveland. While there, they had 2 sons, Charles William, III and Peter Rolla. In 1954 they moved to Lima, Ohio when he became Chief Engineer at Randall Graphite Bearings. During the family’s 7 years in Lima they added 3 daughters; Mary Beth, Katherine Sue, and Martha Alice. In 1961 they moved to Toledo after he was named Plant Superintendent at Bunting Brass and Bronze. In 1969 the family moved to Indianapolis when Charles became Plant Manager at American Bearings, a subsidiary of National Lead. He stayed with NL for over a decade, including a long period after being transferred back to Toledo. Rather than uprooting his family again, he decided to make the 500 mile commute each weekend in order to allow Liz to continue her beloved job as an elementary school librarian and his daughters to finish high school and college without interruption. After 3 years of commuting he returned to Indianapolis and wound up finishing his career at Naval Avionics. It was a job he enjoyed immensely because the fringe benefits included membership at Fort Benjamin Harrison’s Golf Course, where his playing privileges remained intact after retirement.

Aside from golf (and providing his kids the opportunity to play), his hobbies were photographing and making 16mm movies and audio recordings of his young family; acquiring a rather serious stereo system in 1965 to accommodate his record collection; and in later years doing all the repairs on his kids’ cars. In the 1960s, when his sons joined the Boy Scouts he became Scoutmaster. When they played little league baseball he was the coach. In the 1980s, as his grandchildren were born, his specialty became carrying the infants around the house to keep them calm while their parents, aunts, uncles, and grandmother played raucous games of Trivial Pursuit and Hearts. His grandkids now reminisce about the early morning rituals they participated in while he cooked “Big Eggs” and pancakes for breakfast. Julia remembers how he used to comb the tangles out of her hair in the mornings after sleepovers with grandma.

Fun Fact: His family had one dog in the 1930s, one in the 1950s, and one in the 1970s, all of whom were named Bunky. All of his email addresses, internet accounts, and most of his passwords contained the name “Bunky” in them somewhere.

At their 50th Anniversary dinner in 1997, Liz’s speech commemorating their marriage included the observation that her husband could be a bit of a curmudgeon at times. While this was certainly true, nobody who played golf with him ever saw any evidence of it. He observed golf etiquette religiously, especially the parts that stressed cordiality. He never displayed anger after hitting a bad shot and he never indulged in gamesmanship. He wanted to play well but it didn’t bother him if you played better, which is a rare attribute. On the golf course he was happy, generous, enthusiastic, and encouraging — the ideal playing companion.
He was preceded in death by Mary Elizabeth in 2014, after 67 years of marriage; brothers David and Jim, and sister Betty Love.

In memoriam, please consider donating to First Tee, a nonprofit which offers economically disadvantaged girls and boys the opportunity to play golf.
To order memorial trees or send flowers to the family in memory of Charles William Esch, Jr., please visit our flower store.