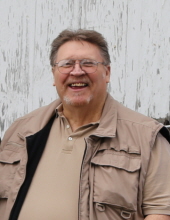 Charlie was born on November 18, 1948 in Kentucky. He was the son of the late Luster F. Engle, Sr. and Anna Mae (Frederick) Engle. He graduated from Plainfield High School in 1967. He served in the U.S. Army as a supply clerk from 1969-71. Much of that time he served his country in Vietnam. He was fiercely patriotic and loved his country. Before retiring in 2011, he loyally worked 42 years as a forklift operator at Coca-Cola in Speedway.

In 1972, he married Joyce A. Winters. They were happily married for 48 years at the time of his death. She survives, along with their two children Chad (Sheena) Engle of Lebanon and Christa (Nathan) Schrock of La Crosse, IN. Also surviving are his pride and joy, his ten grandchildren: Andy, Brady, Connor, Evan, Ferris, Grayson, Ian, Kendall, Mischa, and Nolan Schrock, all of La Crosse, IN. Other surviving family members include his brother Luster F. Engle, Jr. of Advance, Joe (Pat) Engle of Florida, Levi (Barb) Engle of Lebanon, Lois (Hurchel) Biddle of Lebanon, and Slick (Paula) Engle of Advance. He also enjoyed countless nieces and nephews.

In addition to his parents, he was preceded in death by his sister Betty Yarber and his infant brother Jerry Engle.

Charlie was a faithful member of Mounts Runn Baptist Church in Zionsville, IN. He also enjoyed listening to Jim Reeves and watching westerns. He would argue that the Lone Ranger was the best. He was known for his quick wit, constant smile, and his love for Jesus.

A memorial service will be held on Tuesday, October 6th at 5 p.m. at Mounts Runn Baptist Church, 250 South 775 East, Zionsville.
To order memorial trees or send flowers to the family in memory of Charles Engle, please visit our flower store.