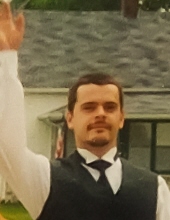 Chad Edward Wilson, of Muncie, Indiana, passed away on Sunday, April 4, 2021 at the age of 43. He was born in Muncie to Daniel and Judy (Maurer) Wilson on February 14, 1978. Chad grew up in Muncie and was always tinkering around with things around the house wanting to take them apart and put them back together. He also had a deep fascination with old war planes… he could tell you everything about them and even draw you a detailed picture if you wanted!
When Chad grew older he was blessed with a son, Dylan Christopher Dean. On June 17, 2003, at the age of 25 he married his childhood sweetheart Tasha; from this union two girls were born, Kathryn Olivia and Sammantha Jean.
Chad continued to be a History buff as he grew older and many of his hobbies included learning things about our past. Geology also became a bit of a hobby for him as he grew fascinated with rocks and stones. But his love for tinkering around with things never left him as he grew older and worked many jobs in the roofing, home building and general construction fields.
Chad was preceded in death by his mother, Judy (Maurer) Wilson.
He leaves behind to cherish his memory: his father Daniel Wilson; children, Dylan Christopher Dean, Kathryn Olivia, Sammantha Jean, and step-son Braxtyn Lee; dearest friend Tasha Wilson; brother, Daniel Jr.; sisters, Candace True, Renee Snow, and Stephanie Abbott.
Visitation will be held at Full Gospel Temple, 212 W 7th St, Muncie, IN, on Friday, April 9, 2021 at 10:00am; Services will start at 11:00am. Burial: Tomlinson Cemetery, Muncie, IN.


I know how to live humbly, and I know how to abound. I am accustomed to any and every situation—to being filled and being hungry, to having plenty and having need. I can do all things through Christ who gives me strength. Nevertheless, you have done well to share in my affliction.
To order memorial trees or send flowers to the family in memory of Chad Wilson, please visit our flower store.