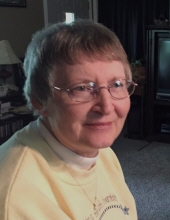 Carolyn June Coffing, 80, of Crawfordsville, passed away on February 1, 2020. She was born on June 14, 1939 to Donald and Esther Furr in Fountain County, Indiana.

Carolyn retired from Pace Dairy, Wal-Mart Optical and County Market. She was a member of the Woodland Heights Christian Church.

Carolyn is survived by her children, Chuck (Christy) Crowder of Crawfordsville, Bryan Coffing of Pennsylvania, Rick (Deb) Crowder of Lafayette, Tina (Roger) Amstutz of Crawfordsville; 13 grandchildren and 19 great-grandchildren; sisters, Janice Pass and Sharon Davis; brothers, Marvin Furr, Terrell Furr and Paul Furr; along with many other family members and friends. She was preceded in death by her husband, Ron; her parents; and a sister and brother.

A Celebration of Life will be held at a later date. Carolyn will be laid to rest at Oak Hill South.
To order memorial trees or send flowers to the family in memory of Carolyn June Coffing, please visit our flower store.