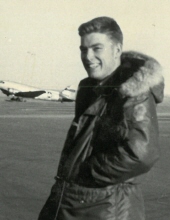 After deteriorating health over the last few years, Carlin succumbed to Covid 19 that swept through the rehab center he was about to be discharged from. He accepted Jesus as his personal savior and now will suffer no more and have eternal life. Praise the Lord!
He was the first born of Irwin and Eva (Paul) Shank in Indianapolis and was a graduate of Warren Central High School. He married Delores Jean Nooner in 1955 and had 5 children. They traveled the world together and had the adventures or raising a family at the same time! After a divorce in 1976 (they remained friends for life) he married Sharon Stevens Billhymer in 1981. Carlin served in the USAF from 1952 to 1972. He was stationed in many places that included Greenland, England, France, Guam, and stateside Indiana, North and South Carolina, Georgia, Texas, Kansas, and Florida. He really enjoyed deep sea fishing in the Gulf and was very good at it! He was a veteran of both the wars in Korea and Vietnam. Upon retirement from military service, Carlin realized his lifelong dream of buying his own farm in Indiana. He had grown up on a farm near Indianapolis and always wanted to be “Back home in Indiana” (sing it!). In the years he was married to Sharon (before she passed in 2010) they enjoyed going to Air Force Squadron reunions all over as Steve was there to care for the cows.
Carlin is survived by his siblings as follows; Ann (Richard, d) Young, Tucson, AZ, Bill (JoAnn, d) Shank, Anderson, IN, Sarah (Steve, d) Oetinger, Phoenix, AZ, and Jim (Carol) of OK. Siblings that preceded him in death were Sam (Margie) Shank, Jenny (Paul) Couts, and Richard (Kathy) Shank.
Carlin leaves behind 5 children; Pam (Robin) Clevenger, Indianapolis, Tom (Janey) Shank, Fredericksburg, VA, Steve Shank, (who has been doing most of the work on Carlin’s farm since 1985 keeping a promise of allowing Carlin to stay in the cattle business until his death), Economy, IN, Jeff (Karen) Shank, Shirley, IN, and Angela Billhymer Rogers (Anthony) of Kernersville, NC. He also leaves grandchildren Dorie Clevenger (Jericho) Jones and Zachariah Clevenger, both of Indianapolis, Amanda, Mark, and Caleb Daniel Shank of Fredericksburg and Richmond, VA, Stefanie (Lucas) Cope of Fountain City, IN, Linsey Shank Susalla of Clermont, FL, Craig Shank of Zachary, LA, Johnny Elrod of Dripping Springs, TX, Melissa Shank of Shirley, IN, Jacob Shank of San Marcos, TX, Vaughn Dumas of Indianapolis, and James Dumas and Addie Rogers, both of Kernersville, NC. He leaves greatgrandchildren Kaylee, Garrett, Mason, Jack, Liseli, Zoey, and Ariyah.
He also leaves many nephews and nieces. Special mention are his double nephews and nieces sired by his brother Sam who married Dee’s sister Margie; Sammy (Cathy) Shank, Tucson, AZ, Zodi (Neil) Thornberg, Farmland, IN, Roger (Caixia) Shank, Richmond, IN, Bruce Shank, Economy, IN, and Patty (Scott, d) Lacy of Anahola, HI.
He was preceded in death by his parents, the aforementioned siblings, both his wives, and his firstborn child Regina who died shortly after birth. There is a great reunion happening in Heaven!
Carlin really enjoyed farming and his cows seemed to love him as well. He mentored and encouraged many young farmers including Andy Lawyer. He was generous and supportive of those he loved. He taught his kids to be dependable and hard working.
His service and burial will be at West River Friends Church which borders some of his farm property.
To order memorial trees or send flowers to the family in memory of Carlin Henry Shank, please visit our flower store.