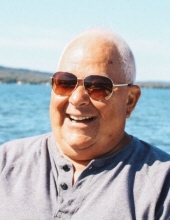 Bruce, originally from Columbus, Ohio, was born to the late Charles and Joan Peitsmeyer on April 28, 1951.

He graduated from Pleasant View High School in 1969 along with his high school sweetheart and now wife of 51 years, Jerri.

Bruce was a US Army Veteran, who served in Vietnam and was a proud patriot of the United States.

Bruce is survived by his wife, Jerri, and his beloved children, Scott (Teresa) Peitsmeyer and Sherry (Stu) Ellis.

His four grandchildren were the joy of his life. Max and Walter Peitsmeyer and Bronson and Rylin Ellis gave him such love, laughter, and happiness. He was so very proud of them all.

He leaves behind his devoted siblings, Jim Peitsmeyer, Terry (Janet) Peitsmeyer, and Penny Peitsmeyer Duenwald (Mike- deceased). His family was very special to him and they all have a loving bond. Bruce cared deeply for his numerous nieces and nephews.

Bruce enjoyed visiting different states throughout the country and locally travelling the country roads in his cherished VW convertible. That was his peaceful pastime these last few months.
He passed at home surrounded by his loving wife and treasured children at the time of his death. He will be missed so much.

His life will be honored with a Celebration of Life on Saturday, September 26, from 3 to 5 pm at the Life Church at 2200 Sheridan Road, Noblesville, IN 46062. All Ohio people encouraged to wear Ohio State gear!

In lieu of flowers, Bruce would ask you to root for the OSU Buckeyes and vote Trump in 2020.
To order memorial trees or send flowers to the family in memory of Bruce Dennis Peitsmeyer, please visit our flower store.