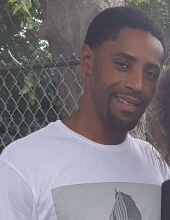 Brian James Andrews was born April 1, 1986, in Indianapolis, IN to James Andrews and Arnetta Byrd. From a very young ago Brian showed great athlete ability. He was a skilled basketball player and was known for being unbeatable on the court. Brain attended Frances W Parker Montessori School and later attended Broad Ripple High School. Brian excelled at writing poetry and loved playing Chess with his mother, although be could never beat her!
Brian was joined in marriage to Jazmyn Morrow on February 5, 2016. Together they attended the Grandview Congregation of Jehovah’s Witnesses. Brian had a love for Jehovah and his favorite scripture was Psalm 83:18 because “there was no way anyone could refute the God’s name is Jehovah”.

Brian worked warehouse jobs most of his life. He was very charismatic and got practically every job he interviewed for! He was a hard worker who loved his family, motorcycles, and dogs. His favorite breed was Pitt Bulls and he even tried to nurse a sick one back to health. Brian was said to have “9 lives” due to the many incidents he survived. He had a heart of gold and touched mostly everyone he came in contact with due to his sweet disposition.

Visitation will at Indiana Funeral Care, 8151 Allisonville Road, Indianapolis, IN 46250 from 11am - 1pm on Wednesday, September 30, 2020. Funeral service will begin at 1:00pm. The number occupants for the service will be limited.

According to CDC and state guidelines, we require attendees wear a mask and social distance when not with their group.
To order memorial trees or send flowers to the family in memory of Brian James Andrews, please visit our flower store.