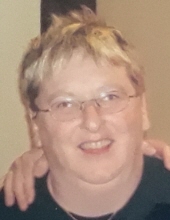 The world lost a beautiful soul, Brenda Jean McIntyre, on November 17, 2021. Brenda passed away peacefully at home after years of suffering from multiple health conditions. Brenda was a fierce feminist and an advocate for all human rights and for all creatures, big and small. She was an ambassador for peace and social justice. Many of her friends and family have said they will miss her kind, compassionate, and forgiving nature.

On June 30, 1962, Brenda was born in Little Rock, Arkansas. She graduated from the University of Arkansas at Little Rock with a Liberal Arts degree. In 1987, Brenda relocated to West Lafayette, Indiana, to pursue a graduate degree in Political Theory at Purdue University. Once at Purdue, she discovered the fascinating programming within Women’s Studies. Thanks to her experiences with Women’s Studies, the Purdue Feminist Union, and social justice movements, Brenda remained a lifelong radical feminist activist and seeker of social justice.

Brenda loved music, particularly music created by women raising their voices for social justice. During her first few years at Purdue, she organized cultural events that celebrated women’s creative and artistic talents. She was a regular at the National Women’s Music Festival. And best of all, she introduced many women to the Purdue Women’s Studies programs, women’s music festivals, and other cultural events. Several of them have expressed their gratitude to Brenda for that introduction.

Brenda firmly believed that all work, paid and unpaid, is valuable. Her unpaid activities included answering various crisis hotlines, volunteering at an animal shelter, supporting and advocating for the disabled, and coaching and leading children’s recreational activities. Her paid careers spanned teaching and social services to house painting with a woman-owned company, retail, and restaurant work. Her social service years focused on women survivors of domestic violence and women in recovery. She also maintained the family household while her partner traveled for paid work. Susan was so very grateful for that support.

Brenda is survived by her life partner of 31 years, Susan Michelle Burton, and their two cats. Her two sisters, Leah (Scott) Kloss, of Beebe, Arkansas, and Darla McIntyre, of Cabot, Arkansas, are also her survivors. Brenda chose not to have children, but she dearly loved her six nephews, three nieces, and ten great-nieces and great-nephews. The family will have a new great-niece in early 2022, and Brenda’s survivors look forward to telling her about her Great-Aunt Brenda McIntyre.

Some of Brenda’s friends have delighted in imagining her Dancing in the Astral Plane, the song and video by musical artist Valerie June. After one of her dear friends shared it with her in 2020, she passed on the video to many others so that they could see that beautiful vision.

Brenda would like you to remember her when you listen to some of her other favorite musical artists. A few of her recommendations would be Carrie Newcomer, Laura Love, Brandi Carlile, and Sarah McLachlan.

Is your life situation financially secure? Do you want to donate to a non-profit organization that Brenda loved? We suggest the National Women’s Music Festival. Go to https://www.nwmf.info/ and look for the [Contribute] tab on the right-hand side of the Home Page.

Plans for celebrating Brenda’s life with a memorial service will be announced later this year.

Here is a poem that reminded us of Brenda Jean McIntyre’s passion for universal justice:

Imagine a woman who believes it is right and good that she is a woman. A woman who honors her experience and tells her stories. Who refuses to carry the sins of others within her body and life.

Imagine a woman who believes she is good. A woman who trusts and respects herself. Who listens to her needs and desires, and meets them with tenderness and grace.

Imagine a woman who authors her own life. A woman who exerts, initiates, and moves on her own behalf. Who refuses to surrender except to her truest self and wisest voice.

Imagine a woman who names her own gods. A woman who imagines the divine in her image and likeness. Who designs her own spirituality and allows it to inform her daily life.

Imagine a woman in love with her own body. A woman who believes her body is enough, just as it is. Who celebrates her body and its rhythms and cycles as exquisite resources.

Imagine a woman who honors the face of the Goddess in her own changing face. A woman who celebrates the accumulation of her years and wisdom. Who refuses to use precious energy disguising the changes in her body and life.

Imagine a woman who values the women in her life. A woman who sits in circles of women. Who is reminded of the truth about herself when she forgets. Imagine yourself as this woman.
To order memorial trees or send flowers to the family in memory of Brenda Jean McIntyre, please visit our flower store.