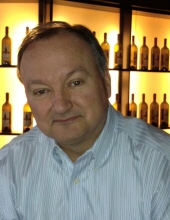 Benjamin Delaney Wyse III, 67, often referred to by his friends as “Jamie” or “Ben”, passed away Monday, November 9, 2020 at home with his wife of 28 years, Debra Adzema by his side.

Jamie was born in Hartsville, SC on September 21, 1953. He grew up in Chattanooga, TN attending Central High School, graduating in 1971. He attended the University of Tennessee graduating in 1976 with Bachelors in Science in Communications and received his Masters in Business Administration from the University of Chicago in 1985.
His life was extremely diverse as his career and interests ran the spectrum. During college he was a cameraman at several CBS & ABC affiliate stations in New York City, Chicago, Nashville & Chattanooga. He also became a chocolatier and co-owner of Neuchatel Chocolates in Chicago. Jamie then used his business background to work on mergers & acquisition of independent colleges in the Midwest, as well as working with World Book Inc. in business development & acquisitions. More recently he formed “ThinkDelanay.com”, for website design & development, where he worked closely with his team and his very good friend, Chris Evans at Evans Alliance in New Jersey.

Jamie was a man of many interests as noted in his career path. However, his love of the great outdoors, nature and wildlife developed early on as an Eagle Scout. He loved “his birds” that he fed and cared for daily at his home often looking for his favorite bird “Big Guy”, a Pileated Woodpecker. But his heart belonged to Bella Rosa, his Havanese dog adored and loved by him and who spent countless hours together either at his side or in his lap.

His true love, Debra, also shared Jamie’s love of adventure and wanderlust. Meeting and marrying in Chicago, they travelled the world either by plane or motorcycle seeking out remote and wondrous locations to explore. These trips provided him the ability to combine two of his other great passions, photography and motorcycles with the opportunity to capture forever in pictures, lasting magical moments. Together they truly enjoyed every single minute and knew how to live life to the fullest!

Jamie was preceded in death by his mother Mary Sue Finley Wyse and his father, Benjamin Delaney Wyse, Jr., otherwise known as “Lane”. When Jamie passed, he left behind countless friends and colleagues, but most importantly his wife Debra, and his brother, Robert Michael “Mike” Wyse (Jackie); his brothers-in-law John Adzema (Maira), James Adzema (Mary) and Thomas Adzema (Cindy); his many nieces and nephews who brought love and laughter to him and were very dear to his heart: Justin Wyse, Ryan Wyse, Kaitlin Paster, John Paul Adzema, Madison Adzema, Mitchell Adzema and Parker Adzema. Family was very important to him and he came to appreciate all that life had to offer each of us. One of his final sentiments was “People would like to think that they made a positive difference in life; I’d like to think I did too.”

The family would like to thank all of Jamie’s physicians, nurses and staff. Additionally, we would like to thank all of the compassionate caregivers at St. Vincent’s Hospital and IU (Indiana University Health) hospital, as well as AseraCare Hospice for their constant attention and kindnesses, as well as the tremendous support they provided Jamie and his family. Finally, to Pastor David Hewitt of King of Glory Church in Carmel, Indiana who gave Jamie and Debra guidance, comfort and peace, we thank you.

Due to COVID 19 restrictions, at this time there will be no memorial service. The date and time of a Celebration of Life for Jamie will be determined at a later date. In lieu of flowers to offer your condolences, the family is requesting that donations be made in Jamie’s memory to:
Lustgarten Foundation, Pancreatic Cancer Research (www.lustgarten.org/donate)
Plant a Tree in a National Forest in Memory (www.alivingtribute.org)
To order memorial trees or send flowers to the family in memory of Benjamin Delaney Wyse III, please visit our flower store.