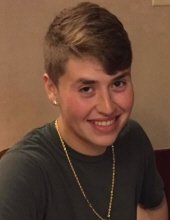 Austin Levi Schultz: A loving person, son, brother, and uncle died unexpectedly on October 12th, 2021, at the age of 26 while at home, surrounded by loved ones.

Austin was born in Indianapolis on October 11th, 1995, to Robert "Alan" and Julie L. Schultz. He graduated from Decatur Central High School in 2013. He worked at Ray's Trash Service as a supervisor and dispatch operator.

Austin is survived by his parents; Alan and Julie Schultz, his brothers; Jory Young, William Schultz, Jeff Reagan, his sister; Ashlynn Schultz, his nephew; Carter James Schultz, his grandmothers; Diane Schultz and Shirly Mccrone. He is also survived by many aunts, uncles, and cousins.

Austin was a devoted uncle. He was an avid meme aficionado and had a smile and laugh that would put a smile on the most downtrodden of souls. He enjoyed making those around him smile and was always ready to lend a helping hand for those in need. He enjoyed cooking for his family, especially Sunday dinners at the Schultz residence where he was always behind the grill. He loved to blast music and drive his car to the limits. He will be deeply missed by his friends, family, and all that knew him.

Funeral service will begin at 3:00 pm.
To order memorial trees or send flowers to the family in memory of Austin Levi Schultz, please visit our flower store.