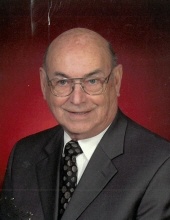 Today is a truly sad day on earth but maybe one of the most celebrated and loving days in heaven, as Arnold George Busse (aka the Fox) has passed away at the wonderful age of 90. Arnold was a loving and tremendous husband of 63 years to his soulmate and wife, Doris Busse, an incredible father to his three children, Alan Busse, Carol Mark and Joni Hitchcock and their respective spouses, (Karen, Dan and Roe) who he treated as if they were born into the family by birth. Arnold was maybe the world’s greatest Papaw to his 11 grandchildren, including Jackson whom the Fox is with in heaven.

Arnold leaves this earth with an ever-lasting legacy of Christianity, love, kindness, stewardship and love for his family, friends and all of mankind. On October 15th, this world lost a true gentleman and scholar but the Good Lord and heaven accepted one of the greatest and most kind human beings ever to be born on this earth. It was fitting as the day the Fox was called it was raining and therefore: the rain was God’s tears for losing such a great person and beacon to mankind but to be in a better place and at peace in his final resting place joining his father, Chris, his mother, Irene and his grandson, Jackson.

Arnold was born on June 24, 1930 in Wilmington, IN. The son of Chris and Irene Busse who precedes him in death.

On August 16,1957 he was united in Holy Matrimony to Doris Boerger. To this union three children were born.

Arnold received his elementary through high school education in Rising Sun, Indiana. He graduated from Valparaiso University in 1958 with a Bachelor Degree in Business/Accounting and continued his commitment to the University by serving on the Board of Directors.
Arnold’s business career included National Container Corporation in Aurora, IN, Ernst & Ernst, Indianapolis, IN, Haag Drug, Indianapolis, IN, Guarantee Auto, Indianapolis, IN and Cornelius Commuincations, Indianapolis, IN.

Arnold dutifully served our country by serving four years in the Navy and was honorably discharged on November 1954.

On October 15, 2020, Arnold departed this life to go home to the Lord and he will always be remembered for his faith, love of family, quick wit, and positive attitude. He leaves behind his wife, Doris; son, Alan Busse (Karen, spouse); daughter, Carol Mark (Dan, spouse) and daughter, Joni Hitchcock (Roe, spouse). His surviving brother, Russell Busse and sister, Leitha O’Day and his 10 living grandchildren and Jackson (deceased).