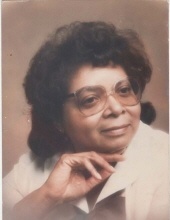 Anna Elizabeth Robinson was born May 25, 1936, to William R. Hewitt and Tishia Mae Hewitt in Pee Wee Valley, Kentucky. As a young child, she lived in Kentucky and really enjoyed being in the country. Later Anna moved to Indianapolis, Indiana where she graduated from Crispus Attucks High School. She was preceded in death by her mother, father and sister, Bertha Porter.

Anna grew up with musical inclinations, playing the violin, singing in church choirs and also with a small group on the radio.

In 1955 she was joined in holy matrimony to Fredric A. Robinson Sr. and to this union five children were born. They travelled extensively while in the United States Airforce (with children in tow), overseas and throughout the U.S. for just over 20 years. Anna worked in management for AAFES and oversaw the operation of the Post Exchange bookstores utilizing her bookkeeping and business skills. She retired from AAFES at Ft. Benjamin Harrison in Indianapolis. Her job, along with her excellent sewing skills and supporting her children in all of their activities, kept her busy.

Anna greatly enjoyed spending time with family and was the link between so many family members, keeping us in touch with one another. Always supportive, loving, giving and compassionate… always ready to help anybody. Anna was always dependable when it came to supporting her children and grandchildren. She lovingly touched the lives of her family and friends and left a positive imprint on us all. In her latter years, her longtime, good friend and travel buddy was Thomas J. Hale, who recently passed. Anna was a committed member of Berean Baptist Church where she faithfully attended until she was unable. Anna departed this life on Friday, March 20, 2020 at the age of 83.